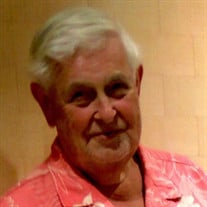 Roger Edward Renwick, age 82. On December 28, 2020, Roger joined his parents in Heaven. He was born in Flint, Michigan to Edward Lawson Renwick and Margaret Ethel (Currin) Renwick on September 28, 1938. He lived in Fenton his entire life and loved the town he called home. As an only child, he learned early to make friends quickly and enjoyed the company of others. His quick-wit and jovial nature endeared him to his family, friends, customers and his community. He was an ambitious young man who obtained his driving permit at age 14 so he could work on a farm. His love of farming crops stemmed from that young age and he continued to farm crops in the area with his son and grandsons until his death. He continued to work for the farm, his family’s R&B Taxi service and his dad’s accounting firm while in high school and college. After graduating from Fenton High School in 1956, he obtained his degree in Accounting from Baker Business College (now known as Baker College) in Flint, Michigan. He met his wife, Ferne Pearl Parker, while in high school and married in Holly, Michigan on September 16, 1961. He and Ferne were blessed with three children, five grandchildren, and four great-grandchildren. Roger had a special bond with his children and grandchildren and loved being an active part of their lives. Having coffee at the homes of his kids was a weekly highlight for him. Roger owned and operated two local accounting firms for 60 years: R-W Accounting and Business Accounting. He counted his customers as his friends and enjoyed sharing stories with them annually at tax time. In 1970, Roger and Ferne bought a small farm in Fenton which brought joy to them both every day. Animals of every kind and crops were raised on the farm and sparked an interest in 4-H when the kids were young. Roger was on the Genesee County Fair Board and was a Fair Superintendent for over 20 years. He also gave back to his community as a volunteer Driver, Director and Board Member for Holly Volunteer Ambulance for over 25 years. He and Ferne travelled all around the world with family and friends and couldn’t wait to go on their next adventure. Their kids share this love of travel as a result. During quiet times, he loved to play solitaire on his tablet, do jigsaw puzzles, and watch black and white western TV shows and John Wayne movies. He is survived by his wife of 59 years, Ferne, children: Edward S. (Nancy) Renwick, Julie M. Hungerford (Greg), and Angela I. Renwick, grandchildren: Nicole (Alan) Renwick Easton, Mackenzie Renwick, Jonathan (Sarah) Hungerford, and Nicholas Hungerford, great grandchildren: Jackson Easton, Maverick Easton, Emma Casemore, and Olivia Hungerford, and special family member Dan Eder. He was predeceased by his parents and grandson Jacob Renwick. In lieu of flowers, donations can be made in Roger’s name to the Genesee County Agricultural Society or Adopt-A-Pet Fenton. A private service of remembrance will be held for immediate family at the Dryer Funeral Home in Holly, Michigan 11 AM Thurs. Dec. 31, 2020. Visitation will be Wed. from 2-6 PM and Thurs. from 10-11 AM before the service. In Celebration of Roger's Life, an Ice Cream Social and Butterfly Release will be held at 2:00 PM Sat. July 31, 2021 at the Benchmark Church, 5530 Runyan Lake Rd., Fenton, Mi 48430. dryerfuneralhomeholly.com

Roger Edward Renwick, age 82. On December 28, 2020, Roger joined his parents in Heaven. He was born in Flint, Michigan to Edward Lawson Renwick and Margaret Ethel (Currin) Renwick on September 28, 1938. He lived in Fenton his entire life and... View Obituary & Service Information

The family of Roger Edward Renwick created this Life Tributes page to make it easy to share your memories.

Send flowers to the Renwick family.