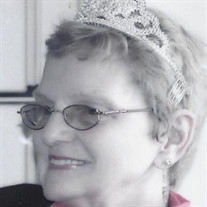 Ruth W. Akers, age 89, of Holly, died Wed. Nov. 23, 2016. Funeral services will be held at 10:00 AM Mon. Nov. 28, 2016 at the Dryer Funeral Home, Holly. Burial will be in Lakeside Cemetery, Holly. Visitation will be from 2-5 and 7-9 PM Sun. Mrs. Akers was born in Stearns, KY on May 15, 1927 to David and Alice (Silcox) Hamby. Her life was centered around her children and grandchildren. Mrs. Akers was also a former employee of GM, Holly Schools, Holly Police Department, Village of Holly, Holly Donut Shop, and Dick's Drug Store. She is survived by 4 children, Sandra Lynn (Patrick Skinner) Parks of Alpena, Pamela (Todd) Allen of Holly, Debbie (Scott) Fischer of Holly, and Joseph (Lori) Akers of Fenton; 7 grandchildren, Mark, David, Leslie, Chris, Shauna, Joey, and Cody; 4 great-grandchildren; and 1 great-great-grandchild. She was preceded in death by her husband Eugene Akers. In lieu of flowers, the family suggests memorials be made to Reverence Hospice. www.dryerfuneralhomeholly.com

The family of Ruth W. Akers created this Life Tributes page to make it easy to share your memories.

Send flowers to the Akers family.