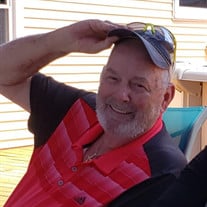 Samuel G. Cross (76) of Holly, Mi passed away February 16, 2022 while wintering in Arizona after a short illness. Sam was a lifelong Holly resident, only leaving for Arizona in the winter because he didn’t like to golf in the snow as he would say. He worked for General Motors at Flint Metal Fab for 33 years, starting as a welder and retired as a supervisor. He was a charter member of Holly Volunteer Ambulance (HVA) and volunteered there for many years. He had many passions in life, Family, Fishing and Golf were at the top. Linda, the love of his life, who he was married to for over 25 years. His kids Kris, Kevin, and Kirk. His family was important to him and he loved having all of us close to him and looked forward to Sunday dinners. He loved to spend time watching his grandkids and great grandkids growing up. He was always at their sporting events, band concerts and awards ceremonies supporting them and telling them how much he loved them and how proud of them he was. He was a lifelong fisherman who loved living on the water. Nothing tasted better to him than fish he caught, especially walleye. When he wasn’t with Linda or spending time with his family, he was golfing. Golf was his biggest passion outside his family. There was nothing he wanted to do more than golf with his friends and decades long golf league partners Dave and best friend Larry Polzin. The Monday guys Larry, Tom and Sandy. As well as all the others that are too many to name. and they golfed a lot!. When the weather started to turn cold in Michigan and just after deer camp, he would start getting ready for golfing in Arizona with his very good friends Mark & Hal during the winter. He held Linda's siblings and Arizona family in high regard and looked forward to spending time with them over the winter months. Those he left behind to carry on his memories are his daughter Kris (Joe) Fleckenstein of Holly. His sons, Kevin (Janice) Cross of Holly, and Kirk (Michelle) Cross of Holly. Grandchildren, Arron, Megan, Timothy, Meadow, Andrew, and Ashley. Great-Grandchildren Blake, Gavin, Trey, Jillian, Colton, Ian, and Savannah. Sisters, Alice (John) Noble, Glendine (Albert) Kidd as well as several nieces and nephews. Awaiting his arrival in heaven were Linda, his parents Glenn & Theressa. Siblings Mary, Ruth, Beverly, Don, Leona, Laura and Harold. Granddaughter Amanda and life long best friend Al Brown. Per Sam’s wishes, there will be no service. A Celebration of Life will be held at a later date.

Samuel G. Cross (76) of Holly, Mi passed away February 16, 2022 while wintering in Arizona after a short illness. Sam was a lifelong Holly resident, only leaving for Arizona in the winter because he didn&#8217;t like to golf in the snow as... View Obituary & Service Information

The family of Samuel G. Cross created this Life Tributes page to make it easy to share your memories.

Send flowers to the Cross family.