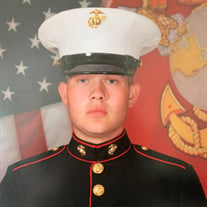 On Wednesday, February 10, 2021 Sean Robert Boyer passed away unexpectedly at the age of 33. Sean was born in Warren, Michigan on August 10, 1987. Sean graduated from Tecumseh High School in 2005. He proudly served in the United States Marine Corp from 2008 to 2012. He earned a degree in golf management from the Golf Academy of America in 2016. On May 12, 2017 he married Adreona Presgrove and they welcomed their son Nolan on January 11, 2019. Sean was a loving husband and an amazing father that loved raising his son who is his carbon copy. Sean had an infectious smile and laugh that displayed his love for life and the people around him. He lived his life unapologetically and without limits. He loved all sports, especially golf and baseball. He proudly earned two hole in ones at his hometown golf course. Sean was a knower of all facts trivia related, loved jokes, and loved music. In the Marine Corps Sean deployed to Afghanistan and earned a Marine Corps good conduct medal, a combat action ribbon, a sea service deployment ribbon, a Afghanistan campaign medal with a bronze service star, a global war on terrorism service medal, a national defense service medal, a Navy meritorious unit commendation, a NATO medal ISAF Afghanistan, a third expert rifle qualification badge and a marksman pistol qualification badge. Sean was preceded in death by Grandfather and Grandmother Boyer along with his Grandfather Hunko and cousin Patrick Sweeney. He is survived by wife Adreona Boyer, son Nolan Boyer, his parents Robert Boyer and Margaret (Dan) Putnam, his sister Erin (Matt) Hassenger, his brother Andrew (Tori) Hughes and three nieces. He is also survived by a large extended family of aunts, uncles, cousins, Marines Corps brothers and a large group of friends. Visitation will be held on Wednesday February 24, 2021 at Dryer Funeral Home in Holly, MI from 9:30 am to 12pm. Military honors and burial will be at Great Lakes National Cemetery Holly. In lieu of flowers please donate in honor of Sean Boyer to the Wounded Warrior Project. www.dryerfuneralhomeholly.com

On Wednesday, February 10, 2021 Sean Robert Boyer passed away unexpectedly at the age of 33. Sean was born in Warren, Michigan on August 10, 1987. Sean graduated from Tecumseh High School in 2005. He proudly served in the United States Marine... View Obituary & Service Information

The family of Sean Robert Boyer created this Life Tributes page to make it easy to share your memories.

Send flowers to the Boyer family.