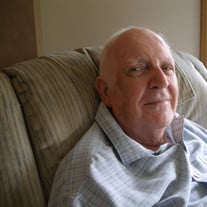 In the late morning of April 2, 2015, Thomas (“Tom”) Leonard Welker, aged 84, passed peacefully into the arms of our Lord after a long battle with dementia. Born July 13, 1930, in Detroit, Michigan, Tom was the second child and the first son of Harriet (nee Bokuniewicz) and Thomas. He graduated from Saint Casimir’s High School in 1948, where he participated in Polish Club as well as Orchestra, and his senior yearbook recalls him as “Debonair and dependable, qualities that make the perfect gentleman.” He joined his life to Peggy’s (nee Delaney) in matrimony on November 3, 1956. According to Peggy, even their first date signaled the love of fun and willingness to take a little side trip into adventure: After meeting Peggy’s mother, Nora Delaney, and making the best first impression he could, Tom took Peggy on a moonlit cruise, with dancing, but the fun lasted well past curfew. Arriving home in the wee hours, Tom and Peggy escaped Nora’s wrath only by the clarity of their love: Nora knew this would soon be her son-in-law. A romantic at heart, Tom travelled with his family each summer to Gatlinburg, Tennessee, and Florida, repeating the Honeymoon road trip. His love for the road less travelled meant, of course, that the family usually drove deep into unmapped forests, looking for rapids and keeping a sharp eye out for a Johnny Cash sighting. Tom did, indeed, love the music of Johnny Cash, playing vinyl records at home and cassettes in the car on those long road trips. The music of his own accordion often filled the evenings, after Tom had valiantly battled wasps’ nests, courageously inspected the scary crawl space, or good-naturedly endured yet another child’s frightening attempts to learn how to drive in the parking lots behind closed stores. Tom’s deep love for his family made all of his children stronger and braver. Throughout his life, Tom was a fixture at early morning mass. In his childhood he served as an alter boy for St. Casimir’s Catholic Church in Detroit. He raised his children within St. Robert’s parish, which ministers to the Redford and Livonia communities, and in his golden years, he attended St. Rita’s, which ministers to the Fenton and Holly communities. A proud veteran, Tom served his country as a soldier in the United States Army (1951-1953), stationed primarily in Germany, working as a mechanic. A talented technician, Tom was also a creative, imaginative designer. During his employment at Michigan Bell, he devised creative solutions to clients’ problems. Memorably, he once jerry-rigged an emergency telephone for a bakery owner during the Christmas season rush; she was so grateful for Tom’s saving her seasonal orders that he came home with trays of cookies, much to the delight of the Welker children. After more than 42 years of service to Michigan Bell, Tom and Peggy retired to a more secluded country home in Holly, Michigan. There he enjoyed the company of his grandchildren and the beauty of nature. Tom was preceded him in death by his father, Thomas, his mother, Harriet (nee Bokuniewicz), and his sister Eleanor Burzynski. Tom is survived by his devoted wife of 58 years, Peggy; brother Donald Welker (Dee); children Mary Serecky (Steve), Jean Maissen (Benedikt); Carol Hollowell (Thomas), Thomas Welker (Nancy), and Rosanne Simeone (David); grandchildren Kerri Ohman (Westley), Cale, Brian, Stephanie, Sean, Megan, Lillian, Caroline; and many loving nieces and nephews Following an 11:00 am (10:00 am visitation) memorial mass Thursday, April 9, at St. Rita’s Catholic Church, Tom’s remains will be interred at Great Lakes Veteran’s Memorial Cemetery, in Holly, immediately following the church service. Donations may be made in Tom’s name to Heartland Hospice, 6211 Taylor Drive, Flint, MI 48507 (attn: Bereavement) or St. Rita’s food pantry 309 E. Maple St., Holly, MI 48442. The Welker Family offers special thanks to the compassionate staff at Tanglewood Assisted Living and Home Care, as well as Heartland Hospice. Their loving care eased Tom’s final days. Memories and words of condolence may be shared at the Dryer Funeral Home online Guestbook (http://www.dryerfuneralhomeholly.com/obituaries/Thomas-Welker/).

The family of Thomas L. Welker created this Life Tributes page to make it easy to share your memories.

Send flowers to the Welker family.