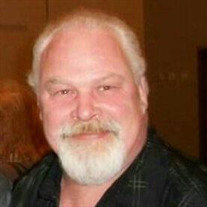 Timothy B. Way, age 58, of Linden, died Sat. Aug. 26, 2017. Funeral services will be held at 1:00 PM Wed. Aug. 30, 2017 at the Dryer Funeral Home, Holly, with Rev. Donald Neuville officiating. Visitation will be from 11AM until the time of the service on Wed. Military honors and burial will be at 10:00 AM Fri. Sept, 1, 2017 Great Lakes National Cemetery. Mr. Way was born in St. Paul, MN on April 14, 1959 to Kenneth and Barbara (Gardner) Way. He served his country in the US Army as a military policeman. He was a bingo hall enthusiast and outdoorsman. He enjoyed hunting, fishing, and watching wrestling. Surviving are 2 sons, Timothy Way of Fenton and Kenneth (Amanda) Way of Fenton; 3 grandchildren, Gabriel, Landon, and Ethan; his companion Rebecca Hurd and her children, Stacy Daul of Fenton, Ashley Adkins of Haslett, Lindsey Hurd of Fenton, Kaitlin Hurd of Linden, and Bret Hurd of Linden; and Rebecca's grandchildren, Sheridan, Jaxson, Addison, Eli, Logan, Brayden, Jake, and Rex; parents Kenneth L. and Barbara Way of Gladwin; 2 sisters Rebecca (Steve) Rine of Gladwin and Connie (Michael) Brown of Byron; and many nieces and nephews. Memorial donations may be made to Adopt-A-Pet of Fenton. www.dryerfuneralhomeholly.c

The family of Timothy B. Way created this Life Tributes page to make it easy to share your memories.

Send flowers to the Way family.